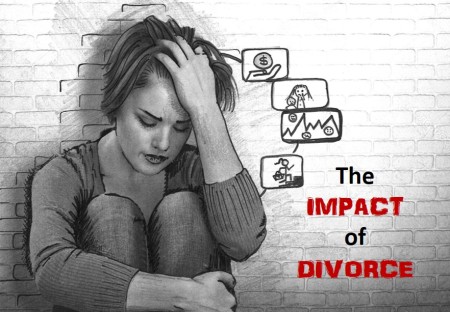 Going through divorce is extremely stressful wherever you live.

In 2019, RED DOOR conducted a survey of women’s experience of divorce. As a Hong Kong based practice, we were particularly concerned if the experience in Hong Kong appeared different from that experienced from women overseas. An initial comparison of women from HK and other countries (United States, United Kingdom, Australia and others) indicated strikingly similar patterns, indicating the impact of divorce is not strongly contingent on where you live. Regardless of location, over 75% of the women reported that the experience was stressful, and over 90% of those experiencing divorce felt significantly changed by the process. 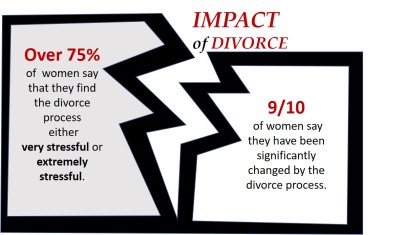 What concerns women during divorce?

During divorce women face a number of worries. Regardless of the stage of divorce (contemplating divorce, divorce in progress, completed divorce) the pattern of concern remains the same. The highest rated concern regards finances. This is probably not a surprize and much of the divorce process is spent discussing, divulging and dividing financial assets.

The second highest concern during the divorce process was the potential impact of the divorce on the children’s emotional wellbeing. Children are invariably affected by the process of divorce but as divorce is much more common than it has been in the past, better support for children can be made available. Collaborative co-parenting, therapy and respect for the child are extremely helpful. RED DOOR has blogs on this topic. 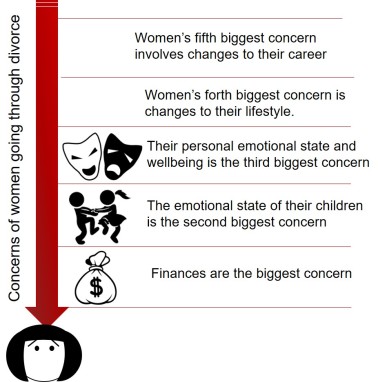 The third highest rated concern for women is their own emotional wellbeing during the divorce process. The divorce process is extremely emotionally taxing and a lot of the negative feelings can not be avoided. These can include feeling overwhelmed, ashamed, anxiety and depression. Women need support during this time, from friends, family and potentially professionals.  Personally, I recommend to join a support group if at all possible. Seeing other women navigating this trying time can be strangely comforting.

Other highly rated concerns for women experiencing divorce include worries about lifestyle changes and career changes. Lifestyle concerns are proxy responses for financial concerns, as changes in lifestyle are directly related to change in finances. Career change may involve the need to earn more, go back to work, gain greater financial independence, or take control of finances again.

Changes that were experienced because of divorce

Our respondents were asked how they perceived that they were changed as a consequence of going through divorce. We expected financial changes to be the highest rated experience but it was not. We consider that financial changes are expected so, potentially, less stressful than changes that were unexpected.

The biggest change women experienced was their level of independence. Some women stated they felt controlled in their marriages, and welcomed this independence. Others expressed that they were uncomfortable with this new sense of independence.

Women reported that their ability to cope with change had been altered. Given the frequently stressful experience of divorce many women were proud to have survived the process.

Women also reported experiencing changes in their career because of the divorce. Again, this could be perceived negatively or positively. It has been suggested in research that involvement in a new career can help people recover from divorce more positively.

A whole blog will be dedicated to friendships during divorce. Changes in friendships was frequently experienced. Divorce is a stress-test for friendships. Friends who are determined to remain neutral rarely can. Feelings of betrayal by friends are common.

Unsurprisingly, women reported changes in family relations as a common experience. During divorce families are redesigned, in a new format. In laws may now become a greater or lesser part of the picture. The breakdown of family connections may exacerbate feelings of grief and isolation.

The best sources of support during divorce 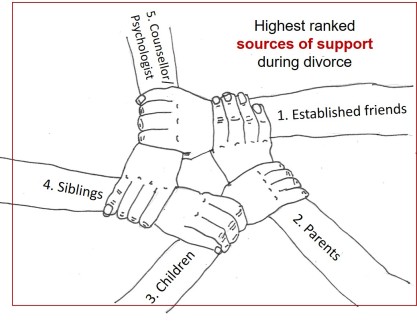 The most highly rated source of support was existing friends followed by members of family (parents, siblings and even children). A counsellor or psychologist was the next most important source of support. Among professional services explored (lawyer, mediator, financial advisor, private counsellor, support group, and accountants) individual therapy was considered the  most supportive.

One third of those surveyed had had the opportunity to join a divorce support group during the process of their divorce. All of the women who attended a support group said this was an important source of support. 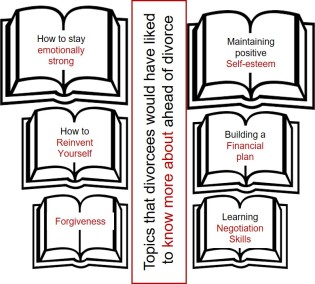 Our divorcing women were asked what knowledge they would have liked to have at the beginning of the divorce process in order to improve their experience of divorce.

Maintaining emotional strength, building and maintaining positive self-esteem, and better understanding how to reinvent themselves were rated as the most “have liked to have” categories.

Aligned to this, being able to forgive was also rated highly. The process of divorce opens a box of darkness within women, often forcing women to explore other hurts in their lives. If this is the case for you, you may find individual counselling helpful.

Many of the women wish they understood  the ability to negotiate and understand finances and investment better even after divorce. As trust may have been compromised in the breakdown of the marriage, learning to trust a financial advisor can be a new challenge. Financial literacy during and after divorce is an important service for women during divorce.

The period of divorce has been called “crazy time” for good reason. It is extremely stressful for women, regardless where they live. Support in the form of family, friends and therapy, are solid protective connections. There is a lot to learn for women going through divorce, and many benefits from sharing information in support groups.

A RED DOOR traditionally means safe heaven, in dreams it means new opportunity. In the practice of mental health, it denotes access to experiences. The red door means an exit, to greater life and strength.

Explore your RED DOOR journey with us now.